Beyond the hype // Johnny Davidsson

Music and fashion go hand in hand, on some level, for everyone.

Johnny Davidsson is a 17 year old student and aspiring musician from Strömstad, Sweden. 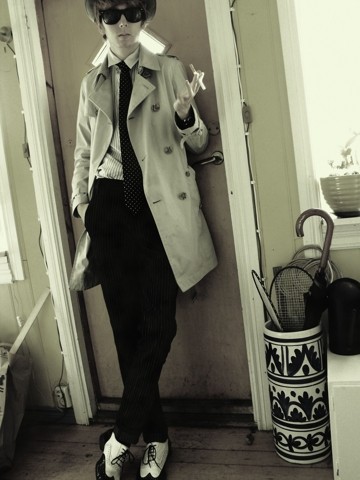 Tell us a bit about yourself and where you live.

I'm only a student. I'm proud to say that I'm a bit like John Lennon in that sense that I've never had a job. The thing that consumes most of my time is my guitar (I write my own songs mostly) and listening to music. I read a lot as well. I live in is this small town called Strömstad near the border of Norway, like one and a half hour drive north from Gothenburg. The styles that surround me here are really not so much to talk about, which I think is a shame! It seems as if some people here just don't care about finding their own style, I don't know.

What do you love about living there?

Well, it's really nice in the summertime. All the boats go out fishing and people sit on the dock of the bay just having a really nice time.

What are you known for amongst your friends/family?

Amongst my friends it's probably that I…well as I said, people here aren't that keen on breaking boundaries in clothing and fashion, so if you wear a blazer or bow-tie to school you are simultaneously seen as both a stupid jerk that tries to show off AND the most stylish kid in school. But I just tell them (those who say I have style) that they should go to Stockholm or any other bigger city—then they'll see some real stylish kids! Or maybe it's all just an illusion that I'm seen as stylish by my friends. If not, it's probably that I'm a bit too loud sometimes, trying to fool around and all. 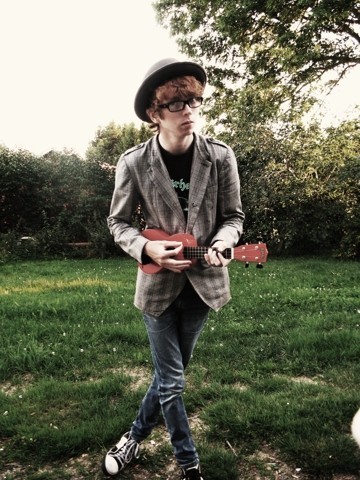 I would say I get most of my inspiration from musicians—mostly bands from the 60's. My favorite period, or favorite years actually, are from 1964 (when A Hard Day's Night started playing in the cinemas) to 1966 (when Bob Dylan had this really big hair and all...love it). I also get a lot of inspiration from movies or series, such as Jeeves & Wooster and movies by Tim Burton. The whole American scene in the late 60's and early 70's with Velvet Underground and Stooges is also a big influence on me…and also a Swedish singer named Håkan Hellström. He's got a lovely sense for fashion! It wouldn't be fair to say this for everyone, but music and fashion go hand in hand in MY world. Since I'm so into music where fashion actually plays a pretty big role, the musicians are an incredible influence on me. But I DO think that music and fashion go hand in hand, on some level, for everyone.

Well, I must say I'm really not an interesting person when it comes to fashion. I don't know any designers and I only shop at like Topman and H&M. I'm really boring in that sense!

I don't really have an area on a person's body that I examine when I see him or her. But if they're wearing glasses I check them out, if they're wearing big red Dr. Martens I look at them with great jealous eyes. So if the person is wearing anything I'd fancy to have, that's what my eyes are drawn to.

Are glasses on girls sexy?

Haha, I wouldn't say that they're sexy…they don't turn me on in any way (you'll have to try harder than that girls!) but I do think that if you wear the right pair of glasses they make a great contribution to a great outfit!

Blazers. A nasty habit for a small boy like me—I don't have any blazers that fit like a glove, and I've got hundreds of them! 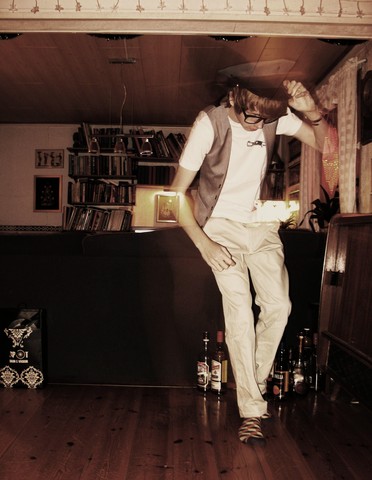 Pants. I don't have that many pants.

Hmm well as I said, I'm a really uninteresting person when it comes to fashion, so I don't even know when I break a rule. I once wore my trench-coat without its belt and it looked hideous. But I don't know…maybe I wear TOO many things sometimes.

I don't wear any flippin' flip-flops. I Hate them with a capital H.

Favorite color(s) of the moment:

Got to be black, since I've been listening to a lot of Joy Division lately.

Let's talk trends. What do you notice?

Hm...Seems like it depends on which movie will hit the box offices next. Maybe that movie called Benjamin something with Brad Pitt will be a success, and old man menswear will come into fashion. Or maybe a band who's wearing bathrobes will have a hit and then everyone wants to wear bathrobes. Oh my god...that's got to be the most stupid answer you've gotten on this question.

Not at all! So you think media is still the biggest and most relevant influence on fashion?

Well, yes I think it's definitely ONE of the biggest influences on fashion. I mean we got magazines, we got internet and we got our dear beloved television and film media. Most actors are the biggest icons in the fashion world. (You know, for the ordinary man that is. One who isn't into fashion in a big way.) Humphrey Bogart, James Dean, Cary Grant, Audrey Hepburn—they've all been fashion icons for 50 years runnin'!

What do you think is the most underrated item in clothing?

I think cufflinks seem to be a bit underrated.

Really? What's so important about a cuff?

Well a cuff, my dear interviewer, may be a really small button, but that doesn't matter! If a hobbit run through a world of talking trees and homosexual wizards, then a small cuff also make a great difference for a plain white shirt! I mean come on! If I see the end of a sleeve from a white shirt stickin' out the end of a blazer, and there's a cuff shaped like an anchor there I'll go nuts, I swear to God! 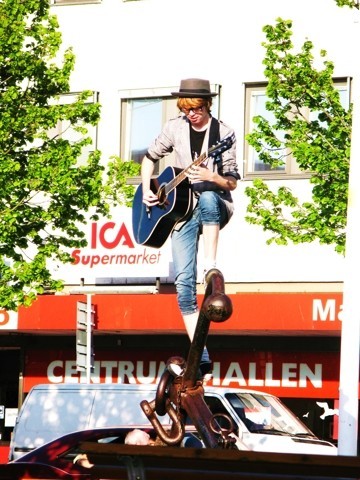 A grey or brown suit for my graduation prom in June.

Are there any famous people whose style you admire?

What's on your IPOD / bookshelf / DVD player at the moment?

On my iPod I mostly play Little Joy, Beatles (Please Please Me), Joy Division and The Legends. On my bookshelf you can see Stoned by Andrew Loog Oldham, Catcher in the Rye by J.D Salinger, John by Cynthia Lennon, Please Kill Me which is the bible of punk and that scene, of course some books about Pete Doherty, High Fidelity!, and two books with guitar chords for loads of Beatles and Bob Dylan songs. And in my DVD there's Control (LOVE IT!), Factory Girl, a huge DVD box with 4 hours of material from The Beatles, and Beauty and the Beast. You can't find a more beautiful tale than that one.

Paris, and I can't say why. I just have an urgent need to get to Paris and spend time in the parks listening to Francoise Hardy! 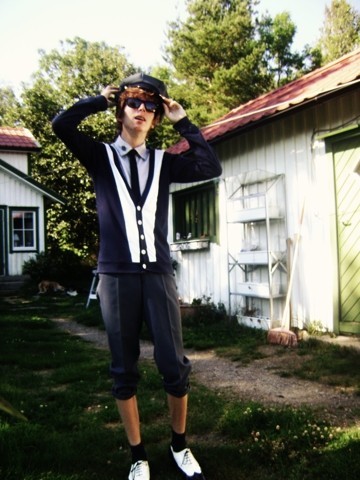 The favorite look by me is probably I'll put my hands over your eyes, but you'll peep through (pictured left). I remember I'd been out partying the night before so I had this great hangover. And my favorite look on LOOKBOOK must....be....hmm...damn! you're all so beautiful! But the best one, well it must be Jolene by Thomas Pope! The clothes aren't stunning but when I see the photo I get this huge feeling of love all through me. It looks like Chuck and Ned (who also are a pretty big influence on my style) from Pushing Daisies. It's just such a beautiful photo.

What is your favorite magazine?

A Swedish magazine called Chili. And of course Asterix and Obelix.

Oxygen. No but seriously I would say...my guitar. I would probably survive without my guitar, but I would lose a lot of interest in life if I couldn't play.

Probably I'll have found myself a band. Whether it's a two man band or an orchestra I don't care, so long as it's an official band and we're playing gigs wherever we can find them!

Will Obama secure peace all around the world (in the sexiest suits ever)?

Listen to the album Help! by The Beatles and then listen to Highway Revisited by Bob Dylan and dress however you feel like after you've experienced those two records. Oh, and by the way, I just want to thank all the extremely kind people on this site! You all always leave such great comments that no day can be a bad day, since there's so many humans out there that are so awfully beautiful and kind. Have a great day.