Beyond the hype // Adeline Rapon

I will never have a static, defined style, and neither will any one else.

Adeline Rapon is an 18 year old from Paris, France. Keep up with her at http://adelinerapon.blogspot.com. 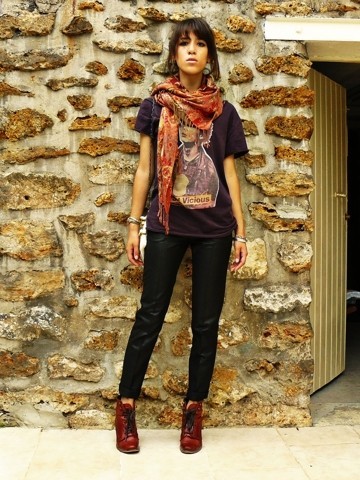 Tell us a bit about yourself and where you live.

I've already said it sooo many times, but I'm so proud of it: I'm mixed. My father's origins are Indian, French and East African. He's from Martinique, West Indies, and my mum is a blue-eyed, blonde French. I love my mixed heritage, especially knowing that my great-grandparents were living in countries that are so far away from each other. (My father's side was actually in slavery in Martinique.) I'm very proud of the diverse history behind my family.

I'm 18 and, for too complicated reasons, I'm losing my first year of college study due to art school admissions issues. But I want to study applied arts (graphics, design, art history…), and I hope I will finally be accepted in a school soon. So what am I doing right now? Studying English literature, which bores me more than ever and creating clothes with my friend Harvey Cindy Pekar, which has become a real passion.

How would you describe Paris and the fashion scene where you live?

I live in a close suburb of Paris. I've always studied in Paris, from nursery to now, so I've spent most of my life in the capital. (But this is pretty common.) In the suburb where I'm living, fashion is...how to describe it? It's a real movement; you can recognize suburbians everywhere. They've got a common style, which comes from last year's fashion mixed with other influences, such as American music videos. I'm generalizing, but it's a very distinct fashion.

Fashion in Paris is very varied across the different districts—bourgeois in the West, bohemian-bourgeois (bobos) in the South, suburbians in the middle. Again, I'm generalizing. It moves and changes so much!

I always will be fascinated by Paris. I'm always the first to play tourist and take photos of places yelling "C'est trop beau là!". Ha, childish. 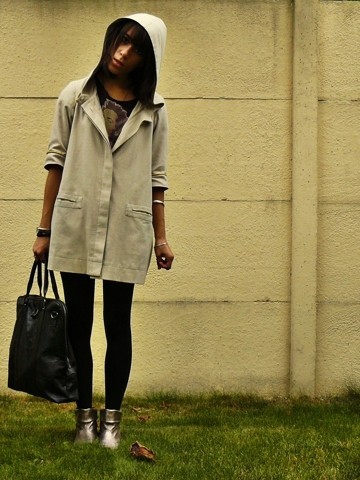 Is it unacceptable to be french and unfashionable? :)

Hahahaha! France is like every other country, some people are fashionable, some not. But I've never seen great fashionable old ladies in other places than Paris. I'm a real big fan of the ones with a little Hermès bag and great coats which you know they have had for so much years but are still like new, and perfect white or black hair. I want to look like them when I'm old because they still care about how they look. I really envy and love those old Parisiennes for their elegance.

I don't know how to describe my style. I try to reinvent each piece of clothing I own, and sometimes it's so hard for me to dress because I just can't wear the same combination twice. Every morning is like a new puzzle I have to resolve; sometimes it takes very long, sometimes I just pick up the right pieces by chance. If I don't recognize myself in the mirror, I just try something else.

My influences and inspirations are very numerous, I often save them in my mental cupboard, forget where they come from and recreate them without being conscious of it. It's mostly on Internet with street style sites. I discovered a great Japanese site thanks to Jane Aldridge, which is Drop - Fashion Street Snap. I'm amazed by the style of the Japanese, how can they be so individualy stylish?

I'm also easily influenced by things I see, like movies, historic fashion exhibitions, trips…I think I will never have a static, defined style, and neither will any one else. 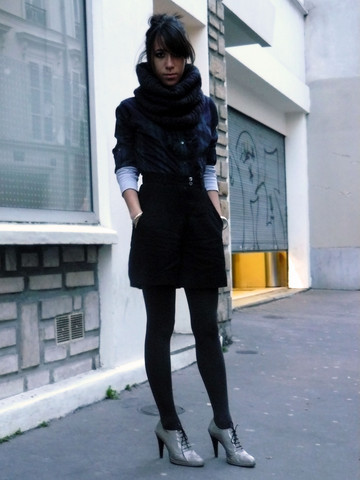 But in reality, I mostly shop at H&M, Zara, Benetton, American Apparel, Parisian brands such as Maje, and British stores like Topshop. I'll be in London this month, so Londoners, I need your advice on where to shop!

If he/she looks comfortable in it.

Food. Such a shame when I think of what I could have bought with all those grande double shot white mochas and scones. I do need therapy.

Work. (Shhh. I also need therapy for my laziness.)


A fashion rule you always break:

It doesn't matter if colors "match" together or not. Brown and blue are cool together. Rules are quite stupid.

Oversized tops should never be paired with oversized bottoms. But I'm not saying I'll never break this rule! 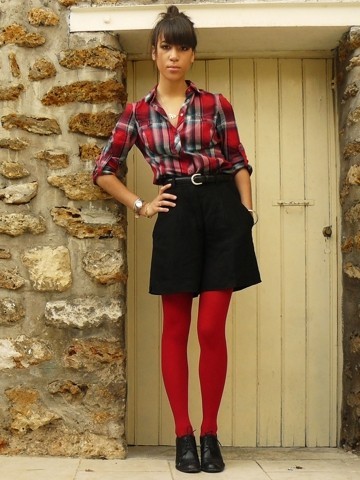 Favorite color(s) of the moment:

I don't know why, but black and red have been my favorite colors for a long time.

Let's talk trends. What do you notice?

Shoulder pads are coming back in, as Betty Autier says. I'm a real fan of the jacket, Thriller, and the artist who sang it. Welcome back, chou!

What do you think is the most underrated item in clothing?

For men, every single item except pants and shirts. For woman, long dresses.

My Mum's wedding dress. It's actually in the "annexe closet" because there's not enough space in mine. But I'm so in love with it, it's so simple, only a savage-silk white dress with frills and short sleeves. I'll wear it if I marry one day. Oh, and my Grandma made it.

Surely the next nice garment I see if I start shopping again.

Are there any famous people whose style you admire?

The Gainsbourg combo: Charlotte/Jane/Serge. They know how to look wonderful in basics. Also, French actresses, but I never remember their names because I'm not a huge fan of French movies (don't whip me!). Then there's Kate Moss and Agyness Deyn...the British "it girls"! 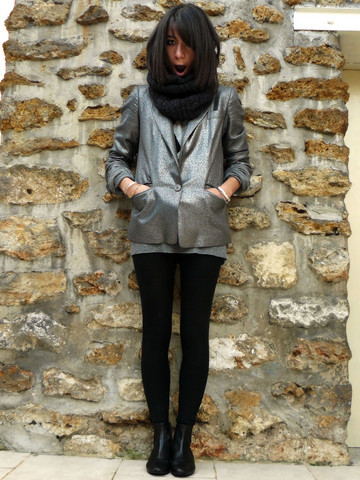 What's on your IPOD / bookshelf / DVD player at the moment?

Music fascinates me, even if I can't even sing "Joyeux Anniversaire" correctly (it's a very hard song, admit it!), and the only thing I ever played correctly with my brother's guitar was the three first notes of "Smells Like Teen Spirit." I love everything. I can listen to Justin Timberlake, then switch to Fall Out Boys, Serge Gainsbourg, Ciara, Ying Yang Twins, Dionysos, Indochine etc. I don't have special tastes. I'm always looking for [musical] beginnings, so right now I'm listening to [music from] the 30's and 40's. Just need to sing and/or dance, whatever the song and whatever the dance.

Ah movies, movies. You Americans are really trop forts. Can't even tell which you which ones, there's too many awesome movies. Titanic, Changeling, Back to the Future (Marti je t'aime aussi)…but I also love British comedies (again those Rosbeefs) such as Mr. Bean and Shaun of the Dead, French comedies (every single one with Alain Chabat or producted by Canal+), and Asian horror movies. I love too many things.

I've wanted to travel to Tokyo since I was 8 years old! I can't tell you how fascinated I am by every single thing from Japan. 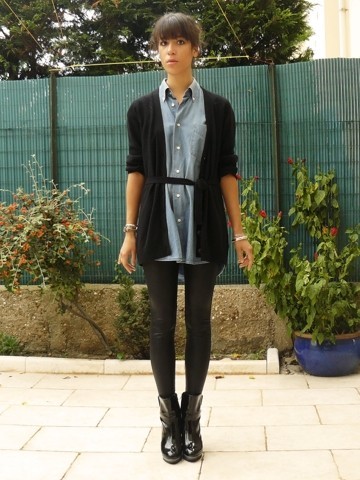 My favorite from me is Jeunes femmes et vieux messieurs, des cheveux elles en ont pour deux (pictured right). I like the simplicity of it.

I've chosen two guys looks because of their inventiveness and personality, and because if I were a boy, like Queen B. sings, I would look like them, and ALSO because I can't make a choice between so many girls' outfits! Meron na tayong tinapay at keso by Jujiin bentley S. and 26.11.08..16.40..Londres. by Sam L.

What is your favorite magazine?

Something about yourself most people don't know:

I never really felt in love with someone. But I have time, don't I?

Still in Paris, or in London (but I'm dreaming too much). Hope I would have my Applied Arts diploma. And maybe pursuing studies in styling or fashion design or something. Just hope I'll be happy. Art is my real passion. Styling & clothes will come after.

Johnny D. wants to know: Will Obama secure peace all around the world (in the sexiest suits ever)?

Hmmm sexy sexy Obama... Can he? I hope so. I just want to wish him all my encouragements, and lots of sexy suits. But, in a certain way, he isn't my President (even if I really would him like to be, instead of our...well, I'll keep what I think of him to myself), so I can't place all my hopes in him.

Remeber who you are. Listen to Mufasa, chéri(e).