Beyond the hype // Peter Galahad

Coco Chanel once said that you should take a look in the mirror before going out and remove one item from your outfit. I'm more likely to do the opposite... 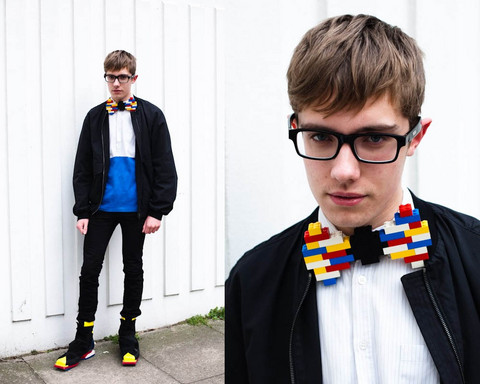 I'm a 19 year old student and fashion obsessive from London, although very soon I'm going to Oxford University to study Politics, Philosophy and Economics (yes, really!). Apparently this is not something that people who make and wear their own Lego accessories do, but in many ways my life is a mass of contradictions. When I'm away I will miss London a lot, not least because London is the most amazing place in terms of fashion (especially youth fashion) and there's no other places in the UK—and indeed few other places in the world—which match up to the fashion energy and creativity we have here.

I started blogging and using LOOKBOOK about a year ago, and both experiences have been very positive. Blogging lets me indulge my fashion obsession; for seeing what other 'real' people are wearing and for sharing what I wear, LOOKBOOK has been great too—in fact, the only thing I dislike about this site is the fact that it wasn't my idea to set it up!

Please explain the obsession with Legos. What inspired you to don toy building bricks as accessories?

I loved Lego as a child, and I had tons of cool pieces, so I think I just never grew out of it…or rather I did for a period, but now I'm totally back into it! It has a nostalgic appeal, but also I think Lego is a design classic, and it fits with this whole ironic revival of old computer game graphics, Space Invaders, Pac Man, Rubik's Cubes etc. a lot of which surrounds the 8-bit music scene. That's not really why I wear Lego though: I was first inspired to make Lego accessories after I failed to convince the staff in Jean-Charles de Castelbajac's shop to sell me the JC/DC Lego pendants and Lego sunglasses they were using to decorate the store mannequins about a year ago. I just thought it was the most amazing idea, so I decided to try out some of my own designs. I've had an email from Jean-Charles de Castelbajac himself about it, after one of the store staff told me to send him pictures of what I made, and I've also been in contact with Castelbajac's 'Lego Wizard' who makes all the display-only pieces in the JC/DC studio in Paris! 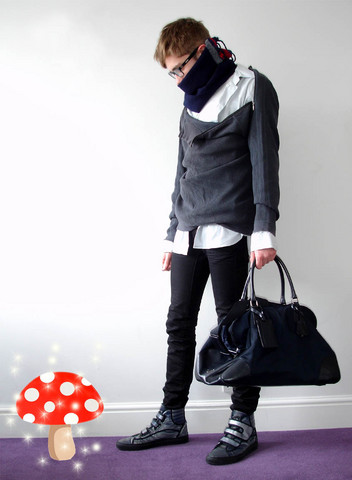 What do you love about living in London?

The energy, the variety, the vibrancy…we have it all in London and then, on top of all that, Paris is just over 2 hours away by train. I love the fact that people in London are generally very open-minded and accepting, not just in terms of race, sexuality, culture etc. but also in terms of fashion. You can go out wearing the most crazy outfit and nobody (except the tourists) will so much as look twice.

Top 3 places to visit in the UK:

London, London, and London! I mean, I love my country and everything, but I've been to loads of other places around the UK and nowhere else excites me as much as London does. I suppose my top three London places to visit would be Shoreditch (it has become a bit clichéd recently, but it's still where a lot's going on; if you go further up the Kingsland Road to Dalston, it's really starting to kick off up there too), Primrose Hill (for the 'village' vibe and amazing views over London), and museums and art galleries—there's always something interesting on in London.

My personal style is a bit insane and a bit schizophrenic at times, but importantly for me I really do have fun with fashion, and my style is evolving (and, I hope, improving) all the time. Diana Vreeland, a former Vogue editor, once said that "too much good taste can be boring," and to an extent I agree. I suppose my personal style is quite unrestrained, creative and fun. I also feel that as I'm only 19, I still have plenty of time to come up with a more consistent, polished personal style. But when I'm older I'll never be able to get away with wearing Legos to fashion week again!

I don't really sit down to consciously take style inspiration from particular places, but rather I absorb things gradually (including from LOOKBOOK, of course). That said, I've always loved the style of Isabella Blow, an eccentric British fashion editor who took her own life a few years ago, not as a direct inspiration but more to do with her whole take on fashion.

My favourite designers of the moment are Raf Simons, Miuccia Prada, Nicolas Ghesquière, Christopher Kane, Jean-Charles de Castelbajac, Marios Schwab. Oddly enough, there are few shops in London where I actually enjoy shopping (hardly anywhere manages to get design, stock and service right), but when I get designer stuff it tends to be from Dover Street Market (despite the bad service there), Selfridges or Harrods. I really love Uniqlo for stylish, affordable stuff, and Topman can be good too.

Shoes! As Jak & Jil blog demonstrates, there seems to be something very powerful about shoes.

Jeans and trousers (pants)—I don't think I have any which cost over £40.

Shoes. People sometimes ask how I afford all my 'statement shoes' (as horrible as that expression is). The answer is that although I do spend more on fashion than the average teen—and I suppose I'm lucky in that respect—I really do skimp on non-fashion purchases. At the moment I have no iPod, a 4 year old rubbish digital camera and an ancient laptop because for me, fashion purchases come before everything else. I know people who would be horrified to spend over £100 on shoes, but who would happily blow £30-40 on one night out, once or even twice every week. Often it's just a matter of priorities. I also buy very small quantities of stuff (just a few carefully chosen pieces each fashion season), and I shop in the sales when possible.

Apparently Coco Chanel once said that you should take a look in the mirror before going out and remove one item from your outfit. I'm more likely to do the opposite, and there's quite a high chance that whatever I add will be made of Lego, to cap it all off! 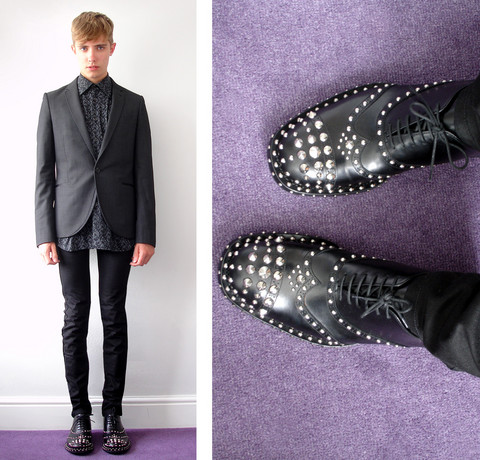 Have fun. (I'm not sure if that is a fashion rule, but it should be.)

The ubiquitous padded shoulders—as if they weren't bad enough first time around! Actually, some people can rock them really well, but personally I much prefer jackets and tops with closer construction. For Spring/Summer 2010 the message from the shows so far seems to be that the power shoulders are going to be less angular and more rounded, almost giving an American footballer vibe.

I would love one of the studded shirts from Prada's Fall/Winter '09 collection, but that's unlikely to happen before the sales.

I mentioned Isabella Blow earlier, and I think I tend to gravitate towards people who totally do their own thing and go a bit crazy with it, while still pulling it off with style—more often than not these people aren't famous though. There's nothing more dull than a heavily styled Hollywood celeb who didn't even pick out his or her own clothes. 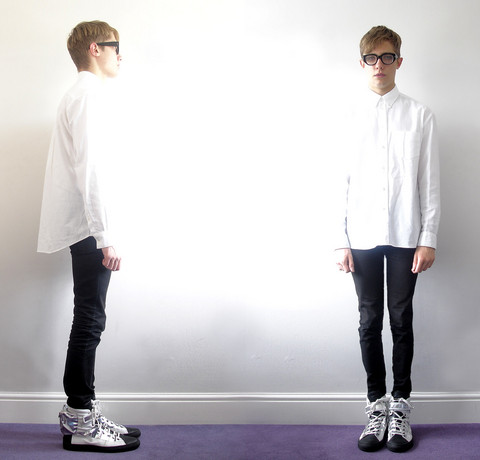 What's on your iPod / bookshelf / DVD player at the moment?

My music taste is very random and subject to much derision from purist friends, but right now I'm loving Junior Boys, Wave Machines, Late of the Pier (still..), The Boy Least Likely To, Santigold and, um, Lady Sovereign always makes me smile! I'm working through the university pre-reading list (!), so at the moment I'm reading 'On Liberty' by John Stuart Mill which is pretty hard going, but luckily not very long. I rarely watch modern Hollywood films, so the last DVD I watched was Hitchcock's Marnie—I have a big Hitchcock obsession. His films are just so well done, and so good at creating a sense of unease and keeping you on the edge of your seat. I love the 50's and 60's set design and fashion, and of course the infamous Hitchock blondes in his later films too.

There are so many looks and people's style I love on LOOKBOOK, I could never narrow it down to a single favourite. But a few people whose style I particularly like who spring to mind are girls: Jane Aldridge, Hannah Sider, Chah Ong, Erika A, Claire W, and Madeleine J; and boys: Snafu ~, Gregorio !, Clément Louis, 1996 ., Andres Sierra, and Mark Cheng. There are still tons of people whose style I love who I've missed&mashlI'd be writing a whole page otherwise…

I think my personal favourite look might be legotastic, my first look ever. It's a rubbish photo, but it marks when it all began on LOOKBOOK for me. Also that was such a fun moment then, when I'd just started doing Lego and it was vaguely more acceptable because the 90's rave/grime revival in London was at its height, and there were these two other guys who were into Lego in a big way, who I used to see in clubs from time to time, and we'd compare notes about our latest creations! 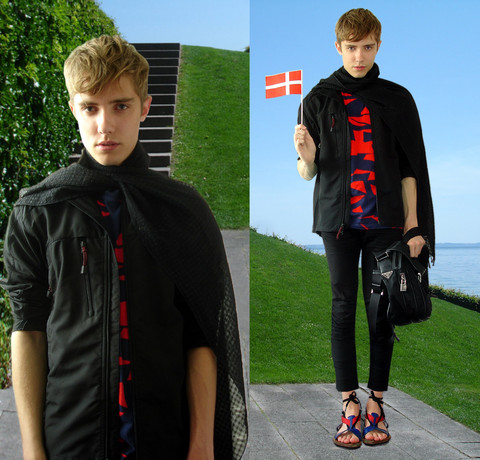 I love Scandinavia—I've never been to Norway, so I'd like to go, but also I'd love to revisit Sweden, Denmark, Finland and Iceland, especially Stockholm and Copenhagen.

Never to be ordinary.

Wearing Raf Simons' Spring/Summer 2014 collection (and quite possibly looking like a fashion victim in it too)!

Look away now! (Laughs) No, I would advise have fun and be yourself.

If you were a superhero, what would your superpower be?