Beyond the hype // Olivia Harrison

I never leave the house underdressed...I always have to make some kind of effort with my clothes.

Olivia Harrison is an 18 year old student with a love for the 80's from Alderley Edge, England. 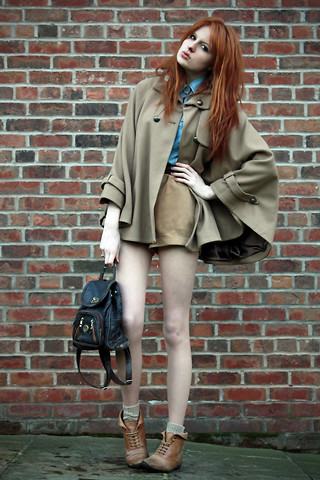 My name is Olivia Harrison. I'm 18 years old, and I live in a village called Alderley Edge, which is about 30 minutes south of Manchester. It's tiny, all that's really here is a forest and a main street, which is littered with cafes and charity shops. Apart from that, there is nothing much around here, so I can't wait to move to London in September for university, which should hopefully be a bit of a contrast! I'm currently in my final year of A-levels at college; I study Maths, French and Psychology, and then I work one day a week in a charity shop.

How did you first get interested in fashion and why is it important?

I don’t know when I first became interested in fashion. It seems like an interest that has always been there, as I grew up in a house filled with fashion magazines. As you can probably tell by now, my upbringing has had a massive influence on my personality, so these early encounters with fashion and clothes mean that now that interest is stronger than ever, and hopefully it will continue to grow.

I would have to say my biggest passion is putting together outfits—I really enjoy expressing myself through my clothes, so how I dress is a very personal thing to me. I am also rather passionate about baking, especially for others. When I was younger, I used to spend Sundays cooking for the family with my Mum, and that’s something I’ve tried to carry on today. On top of this, I’ve been told that I make the best brownies, so I guess that that’s something to be proud of!

What do you love about living in Alderley Edge?

It's a great place for secondhand stores, in particular Oldham Street (which also has some good bars). There's a shop where everything is three pound or less, so you can usually find something in there, and there are quite a few others that rework older clothes into something more wearable, and are still quite cheap. And I love its musical heritage; so many amazing bands started up around here (Joy Division, The Smiths, The Fall, and Inspiral Carpets, etc.), so that makes me quite proud to be Mancunian! 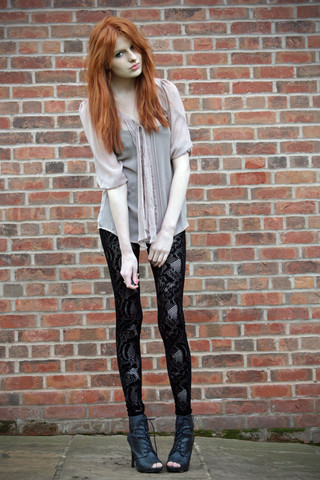 Top 3 places to visit in England:

It's really hard to pick three for the whole of England, so I'm going to narrow it down to London, as it's my favourite place. So I would say tourist places, such as the London Eye, The Victoria and Albert Museum, and also the Natural History Museum.

Secondly, I would say places to shop, like the Sunday markets on Brick Lane, Camden, or Oxford Street, depends what you are looking for. Brick Lane market is basically a giant indoor clothes market, full of secondhand and vintage things, from leather to fur. It’s a great place to go if you feel confident enough to haggle— I usually get too scared and pay full price though! Camden also has a market element to it, as well as shops, bars and places to eat. They have cute little food stalls but also cafes and restaurants, so it really has quite a lot! Then Oxford Street is where you would go for all the major high street shops, like Topshop, Urban Outfitters and H&M.

Finally, I would say Regent's Park, as it's a beautiful park, especially in the Spring and Summer, but it is also home to London Zoo.

Describe your personal style and its influences/inspiration.

At the moment, my inspiration comes mainly from the late 1980's and early 1990's, because around this time, my half sister was the same age as I am now, so I like to use photos of her from that time, and her old clothes, as inspiration. For example, my sister used to always wear Docs with big jumpers, leather jackets or faux-furs, and I think that’s something you can see throughout my looks. She also used to always wear bright or dark lipstick, so I guess I’ve had some inspiration with make-up too. The next thing I plan on copying from her is a velvet choker; I recently found a picture of her wearing one, with dark lipstick and a black dress—it looked amazing, and will be quite fun to mimic, although I am scared that it may look a tad severe!

So much! The music, films and TV shows, culture, and the clothes (especially all the velvet and spandex-type material). It's always intrigued me. I grew up watching repeats of early 90's TV shows, so that sort of clothing always sticks in my head.

My favourite designer by far is Christopher Bailey for Burberry Prorsum, and my favourite places to shop by far are secondhand/charity shops, as you can often find things of good quality for an amazing price when compared to the usual stuff that you find on the High Street. 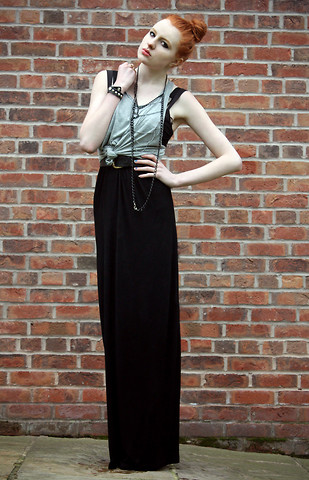 How they seem to feel in it. You can always tell straight away if a person doesn’t feel confident in what they are wearing.

Shoes. I only wear a few pairs of shoes, and they are all either boots (Docs or my pixie boots), brogues, my creepers, or my solitary pair of heels. I don’t really mind this though. I think that shoes are quite interchangeable between outfits (or at least taking this approach is much kinder on my student bank account!)

I don’t really splurge on anything much, but if I find anything that is cheap (like £1), I will buy it even if I don’t end up wearing it that much! I just can’t resist bargains…so I probably waste a lot of money buying things in that way!

Wearing shorts in the winter time. I love shorts and short skirts too much to put them away when the weather gets colder! It looks odd, but I am usually layered up with leggings and tights underneath so I’m warm.

I don’t know if it’s really a rule, but I never leave the house underdressed. I’m don't mind not wearing make-up outside, but I always have to make some kind of effort with my clothes. (I have been told that this is very weird, thus I am a complete weirdo, aha.)

I’ve seen a lot of long skirts, in a light material recently, especially pleated ones. I love them, I really need to get some! 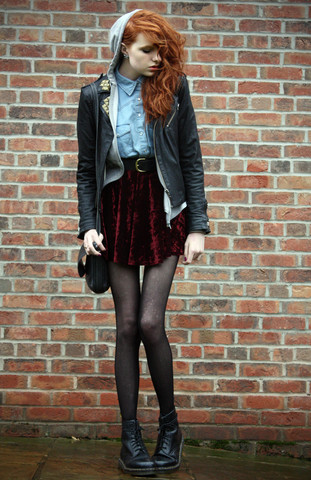 Bow ties, I think that when they're pulled off well, they are the sweetest thing!

A new pair of heels. Although I have a good pair of heels, it would be nice to have a choice between two pairs!

Probably early Madonna, she used to always look amazing, and that style was massively inspiring to me. I've also felt inspired by early '90s shows, like Saved by the Bell and Fresh Prince of Bel Air.

What's on your iPod / bookshelf / DVD player at the moment?

At the moment, I find myself listening to a lot of Echo and the Bunnymen as the sun is starting to come out, and they remind me of summer for some reason. I've also been listening to Charlie Simpson’s solo EP (the frontman of Fightstar), which I gorgeous, it sounds slightly Bon Iver-esque. I’m currently reading Alice’s Adventures in Wonderland for what must be the millionth time, but it’s my favourite, and I’ll never grow tired of it. As for films, I haven’t really watched any recently, apart from maybe Anchorman a couple of weekends ago whilst cutting up old clothes.

My personal favourite is definitely this one (see below), as it’s an outfit that I wear quite often and it was taken on a lovely day, so looking at it always reminds me of then.

As for by another, well, I couldn’t say anyone but my friend Phil, and this look has to be one of my favourites by far!

I’m not usually one for overly public shows of sentiment, but definitely my boyfriend, my close friends, and my family.

When I was younger I went to Malaysia for a holiday and I fell in love with the place. It was so beautiful and the food was incredible, so I’d love to go back! 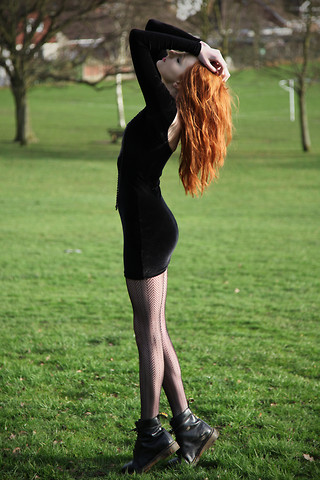 Hopefully working as a fashion buyer for a fashion house, or starting up my own secondhand shop!

What would you say to someone seeking fashion advice?

Just to dress in a way in which you feel comfortable, an outfit will only look amazing if you feel confident wearing it.

Tony S. wants to know: Do you think men really walked on the Moon or is it a CIA conspiracy?

Personally, I have no idea. I mean, the video itself didn’t exactly hold together, since the flag was moving, as if in the wind, but there is no atmosphere on the moon. However, man had been in space before then, and people have been to the moon since then, so I don’t see why it couldn’t have happened. It just seems quite elaborate for a hoax. But I’m not incredibly knowledgeable on the subject, ha.

If you could go back in time to any date, when would it be and why?